He actually studied and practiced some effective creative visualization he learned in a course called The Silva Method, but STILL had doubts about reaching his goal.

So he flew to Laredo, Texas and met personally with Jose Silva (creator of the Silva Method course) to ask JOSE’s opinion about whether reaching such a goal is even possible. The answer he got was THREE words – three words that made a HUGE difference in this man’s life.

What were the three words?

I’ll tell you in a moment.

Now let’s go to Colorado, and Richard Bandler (CO-developer of a field called NeuroLinguistic Programming), is answering a question about beliefs. The absolutely crucial thought you MUST have if you want to create magnificent results with NLP.

What is the belief that he recommends as crucial?

The SAME belief that Jose Silva stated in just 3 words!!

It’s actually a belief that opens the door to better results in ANYTHING you do.

Gary Craig created a change technology called EFT that owes its success to this same belief, by the way. (If you aren’t familiar with EFT, don’t worry. You will be soon.)

I read an article in a magazine about a woman who makes her living speaking with racehorses psychically to help them perform better. (Yes, psychically!)

Which is proof positive to me that — in the US at least — you can get paid to do ANYTHING. In fact, I was on a tv commercial shoot for Volkswagen a few years ago, and there was a woman there for the whole shoot who was just sitting there on a chair holding a clipboard.

After a couple of days, I asked her what she did. Can you guess what her job was? To monitor the weather and make sure the days were nice!

It’s a big deal making a car commercial, and if lousy weather interrupted the shoot, then that meant a lot of money is wasted. So they took out an insurance policy that the weather would stay nice.

So this woman had to note — on her clipboard — how nice the weather was! Since this was Miami in February, the weather was absolutely beautiful, and she was paid to verify this! What a job!

Back to the Racehorse Psychic. When I read her (the psychic’s) story, I remembered that ONE of the many things we did in the Silva Method Basic Course was learn to communicate at a deep level of mind with animals.

Actually it involves mentally scanning the health of the animal, but it DOES include some deep level of rapport and communication with the animal.

Hmm. Maybe I could communicate with racehorses! So I decided to give this a test.

A friend of mine (mentioned in a previous issue of this newsletter – the woman who more than doubled her income with a certain affirmation) dated a racehorse breeder.

I called her and asked her to find out if her boyfriend had any UNDERperforming racehorses, and would he mind if I went to the stable and did a mind experiment.

Did I sound flaky asking such a thing? You bet! But who cares, this was for the sake of science and experimentation.

He said YES, he has a horse that is WAY underperforming, and this slacker stallion has a race coming up at Hialeah in a few weeks.

So the horse-owner’s girlfriend drove me over to the stable, and there I was with this ENORMOUS racehorse. (Strictly speaking, I didn’t have to be PHYSICALLY present with the horse to do this experiment, but it was fun to go to the stable anyway.)

I went to level (Silva Method lingo for quieting your brain to alpha brainwave levels predominantly), went to my mental “lab” and got to work.

I invited THIS racehorse into my lab, and asked if he would like to learn to perform better. I showed the horse pictures of him being in the winner circle, with flowers and champagne and everyone praising him. (In retrospect, I should have mentioned that champion horses are prized breeders as well!)

The horse nodded yes, he WOULD like to perform better.

So I invited a super champion racehorse into my mental lab, side-by-side with this underperforming horse. I asked the champion horse if he would mind sharing his skill with this other horse. He nodded.

I taught the non-champion horse to put the head on of the champion horse and emulate the brain and nervous system activity around racing. To FEEL the difference, and take on THIS new way of acting at the race track.

(If you’re familiar with NLP, you could call this technique the ‘new equine behaviour generator.’) I spent maybe a half hour at the stable — sitting there with my eyes closed doing this work in my mental laboratory — before I said goodbye to the horse.

The race day came, and my girlfriend and I headed to Hialeah Race Track. The horse I worked with was about to race. It was exciting!

After a LONG run around the track, with all the horses clotted together like a big brown 32-legged animal, it was the home stretch, and there was my horse, and he came in . . . FOURTH!

In case you are not familiar with the sport of kings, fourth place means LOSING.

No trophy, no winners’ circle, no champagne, no big cash payout. No breeders’ contract. Nothing but a long walk back to the stable.

I was not disappointed. I just took this as feedback and went back to my life.

Fast forward a LONG time: The man who let me visit his horse has left his family’s racehorse business and becomes a stockbroker. He marries his gorgeous girlfriend, and they have a baby girl.

They invite me to the naming ceremony with 200 of their closest friends, and after the Rabbi does his thing, we all mingled and ate.

At one point, my friend (the wife) mentions the day that she brought me over to the stable to meet that racehorse.

“Oh yeah, I remember, to see about helping the horse perform better.” I said.

The HOST (her husband) happened to be nearby, and asked me to explain what I meant. He had NO IDEA why I went to the stable that day, and this was all news to him.

“You’re shitting me,” he said outloud. (In a living room FULL of dressed-up people, not to mention his Rabbi.)

No, I said, I really went to speak with the horse about performing better.

It turns out that the horse made a BIG turnaround AFTER that following race at Hialeah. Maybe there was some new muscle memory and coordination that needed to happen, or the horse was testing out his new legs, or a delayed reaction in the “programming.”

Whatever it was, I am happy for the horse, and hope he had champagne and flowers and praise!

This next part is important: I wouldn’t have even ATTEMPTED this experiment without that 3-word idea that I told you about at the beginning of this letter. The 3 words Jose Silva said to the man who visited him.

What are the three words?

If something ISN’T possible, and you act like it is, don’t worry. You’ll get feedback soon enough. But what might you NOT try if you don’t have the mindset that ANYTHING IS POSSIBLE?

Now you MIGHT say, “Oh, for God’s sake, what Pollyannish nonsense.” But think about it a moment longer.

What if ANYTHING were possible for you? What would change if you let this thought take root in the deepest part of your mind? Might it change some things in your life starting now?

Do it yourself experiment…

Ask yourself, “What would I attempt now if ANYTHING were possible?”

Don’t ignore the short-term goals. Money, a relationship with someone you desire, washboard abs, etc.

What goals would I reach if anything were possible?

What goals would I SET if anything were possible? 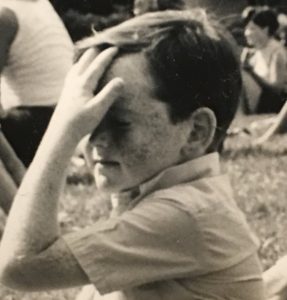 Hi, I’m Sean Collins. I do all kinds of weird mind and self-help techniques and share them with others to test and explore.  Don’t take my word for it that any technique on this or other sites of mine are useful.  I invite you to test them personally and see for yourself.